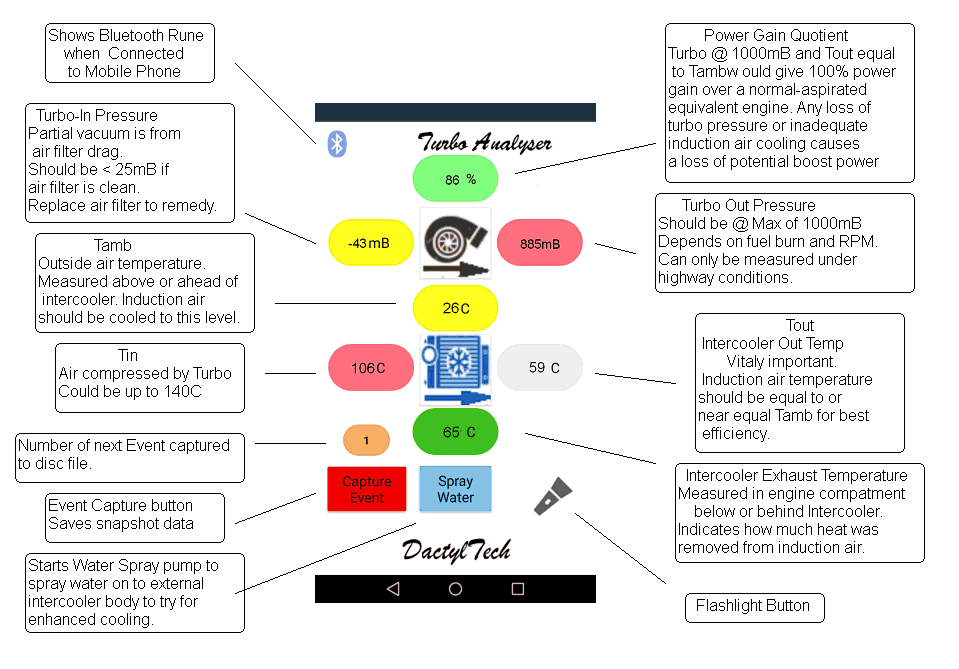 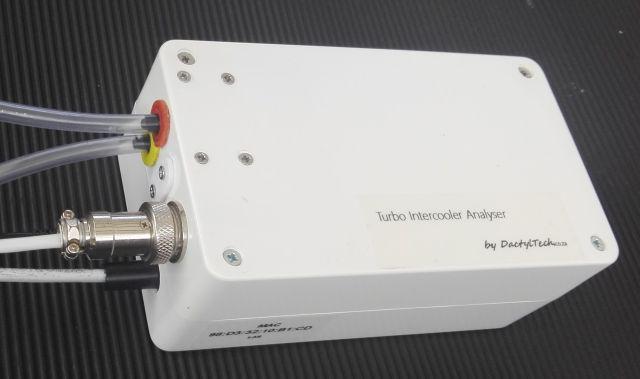 Located in the engine bay for thje duration of the test, it monitors air pressure before and after the turbocharger, the temperatures before and after as well as above and below the intercooler. Data is sent to a mobile phone by Bluetooth.

The analyser control unit is placed under the bonnet where it is supplied with 12V from the battery.and connected to 2 pressure sensors and 4 temperature probes. It transmits data to the mobile phone via Bluetooth every second.

Is installed on any Android mobile  phone running Android 5.0 or higher. It displays the turbocharger/intercooler pressures and temperatures in realtime and can record of significant events for later upload and analysis. It can spray water over the outside intercooler body to determine if any benefit can be derived from this cooling, or whether it's all a myth. The mobile phone app communicates with the monitoring unit and is updated with the latest data once every second.

The Installation page provides details of the  minimum mobile phone requirements and how to install the app. Download the App from the Downloads menu item on the Home page. 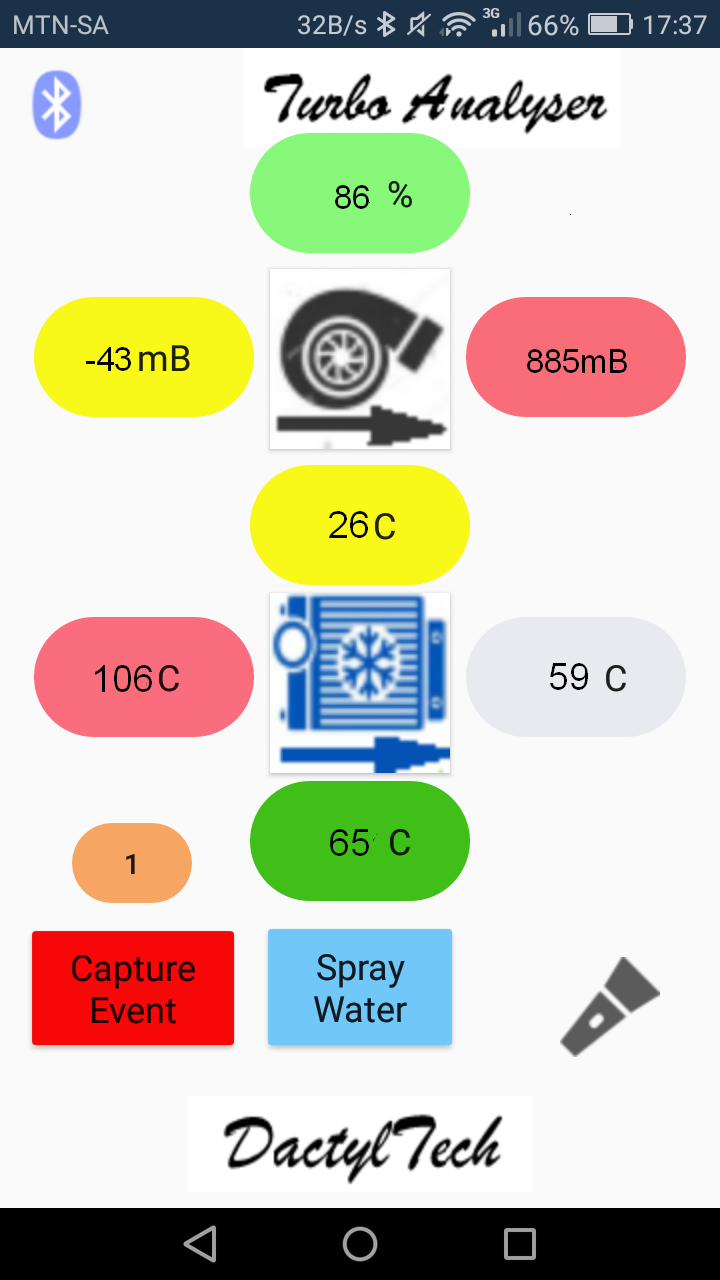 Vacuum at Turbo In is -43mB

Turbo Out pressure is 885mB

The output power of a diesel engine may be enhanced by increasing the the density of the induction air. Air of higher density contains more molecules of oxygen which can be used to burn fuel and release thermal energy. To to achieve this pupose a turbocharger is used to compress air drawn in through the air filter and delivers it to the intake manifold. An unwelcome side effect compressing air is that the compressed air heats up, and this heating inhibits the increase of air density. Maximum air density is attained when the compressed charge is at ambient temperature.

To cool the hot, compressed air it is passed through the core of an Intercooler which, in turn is cooled by an ambient airflow induced by the forward motion of the vehicle. An intercooler may be mounted on top of the engine directly below the bonnet-mounted air scoop that diverts part of the slipstream over the bonnet downward through the intercooler's radiator, or alternatively it can be mounted next to the engine coolant radiator where it can benefit from the same ambient airflow that cools the radiator, and the activity of the radiator fan.

A turbocharger will generally try to compress the incoming air to 1000hPa, which is twice the ambient pressure at sea level, after which the waste gate will bypass further exhaust gas around the turbine. Assuming no increase in temperature this will also double the density in the induction air and potentially provide for a 100% increase in engine power over the normally aspirated equivalent. In practice it is very difficult to cool the compressed charge all the way back to ambient, so the 100% power gain is never fully achieved. This Analyser measures all the relevant temperature and pressure parameters under highway driving conditions, calculates their effect, and displays the result on a mobile phone inside the vehicle.

The two major factors that determine the turbo/intercooler system's effectiveness are therefore firstly the absolute output pressure of the turbocharger and, secondly, how this increase in pressure is converted into air density - and hence engine power - by the cooling capacity of the intercooler. All relevant parameters are displayed on the mobile device, as well as the result of the pressure/temperature computation.

(None of the above applies to  petrol engines since the boost ratio is far lower and fuel evaporation causes substantial cooling of the intake air.)

When Towing a Trailer

If the towing of a trailer increases the tow vehicle's fuel consumption then it stands to reason that the extra air required to burn the higher fuel quantity must pass through, and be cooled by, the intercooler, and the added load will result in warmer induction air being delivered to the engine. How much hotter this air will  be depends on many factors, some of which are hard to predict, so the practical outcome is best measured empirically under real highway operating conditions.

Live testing has shown that a 10% - 20% loss of intercooler efficiency can be expected while towing a medium-sized (1000kg) trailer. On a flat road at highway speed the induction air temperature will rise from about 20 degrees C above ambient to around 60 degrees above. During hard 3rd gear climbs the induction air temperature may reach 100 degrees C above ambient.

The standard Intercooler as designed by the motor manufacturer are generally well capable of fulfilling their intended function, and it is difficult to  make a convincing case for enhancing their capacity or performance. This does not apply to towing trailers however where arduous conditions can overload an intercooler and result in a loss of up to 15% of total potential engine power. Increasing intercooler capacity might lead to a recovery of much of this power loss.

Top-mounted intercoolers rely entirely on forward movement of the vehicle to drive ram air into the bonnet-mounted scoops and down through the intercooler radiator into the engine compartment. At highway speeds this works well, but under arduous low-speed climbs the airflow can easily break down and even reverse, with hot air in the engine compartment flowing upwards through the intercooler's radiator, resulting in very hot air being delivered to the intake manifold. This is where front-mounted intercoolers enjoy a distinct advantage since they benefit from cooling airflow forced by the engine's fan even under the lowest forward speeds.

There is a commonly held belief that the intercooler assists in lowering engine temperature. This is entirely incorrect. At least 74% (27MJ/L) of the heat released when diesel fuel is burned is discharged through the exhaust pipe, the oil cooler, or the radiator. An efficient intercooler delivers denser air which allows more fuel to be burned per engine revolution. Since more fuel is burned in the denser intake air, more heat energy is released in a given time and the excess must be dissipated through these channels. Therefore a more efficient intercooler will tend to make the engine run hotter and not cooler, if the extra available power is used.

Captured data downloaded and presented in graphic form on a common Excel spreadsheet. Record files are uploaded directly from the mobile phone and saved data is displayed graphically for easy, unhurried analysis.

What the Analyser Does

What Benefits You Can Expect.

Any standard factory fitted intercooler will deliver between 80% and 90% efficiency under highway cruise conditions, which means the induction air will be cooled to within between 30 and 60 degrees centigrade of ambient. Since this represents a loss of potential engine power of only 5 - 10% it is difficult to justify an expensive after-market intercooler, which itself will never be more than 90% efficient since heat transfer slows markedly as the temperature gradient across the intercooler reduces - the last 30 degrees of heat is the  most difficult to dissipate.

However what will be interesting to learn is:

An average-sized turbocharged engine at full power sucks upwards of 100 litres of air every second. All of that air must pass through minute holes in a paper screen, holes that may not be larger than 5 microns in diameter. Any clogging of those holes will impede airflow and cause a partial vacuum between the filter and the turbocharger. With a clean air filter that pressure drop will vary between 10 and 20hPa and never exceed 30hPa. It is common practice for workshops to simply blow out air filter elements with compressed air, thereby clearing large particles of dust and debris from the paper folds, but this does not extend the life of the air filter in any way. Once the element has changed colour from from the original white or yellow to a dull grey it has become so contaminated that it will resist the free-flow of air to the extent that it causes a pressure drop of up to 100hPa in the intake tract, which will definitely affect engine power. An air filter element should be replaced as soon as it looks dirty.

Turbochargers require large volumes of exhaust gas to drive the turbine of a turbocharger hard enough to develop 1000hPa of boost pressure. This volume of gas cannot  be generated unless the engine is working at large throttle openings under load.- which requires highway driving conditions. Excessive boost is prevented by an exhaust gas waste gate opening as the turbocharger approaches maximum boost. The operation of the waste gate can only be tested under full load conditions.

Under highway driving conditions the air pressure under the bonnet will be very close to ambient. At 120Km/h the ram effect at the intake of the scoop above the intercooler will be 555 Pascal or 5,5hPa above ambient, which is sufficient pressure differential to send a strong airflow through the intercooler's vanes. During an arduous climb at 60km/h with the engine's cooling fan working hard, this pressure differential can be much reduced, slowing this airflow considerably - even reversing it at times, when hot air from the radiator flows upwards through the intercooler elevating induction air temperatures to as high as 150 degrees Centigrade and rendering the intercooler totally ineffective.

Collectively these conditions can rob the engine of a considerable portion of its potential power, and they can be comparatively inexpensive to remedy.

Much is made of the fact that race cars are equipped with jets that can spray cooling water onto the outside of a intercooler to enhance it's operation. Spraying water onto an intercooler can reduce it's temperature by up to 20 degrees C for a short period during which any performance increase from the engine can be assessed, but it does not remedy any long-term problem.

The controller can deliver 12V output power, through a relay controlled from the mobile phone app, to an external water spray pump, to simulate the effects of improved intercooler efficiency. The spray pump is typically an after-market window-washer pump that must be separately installed. 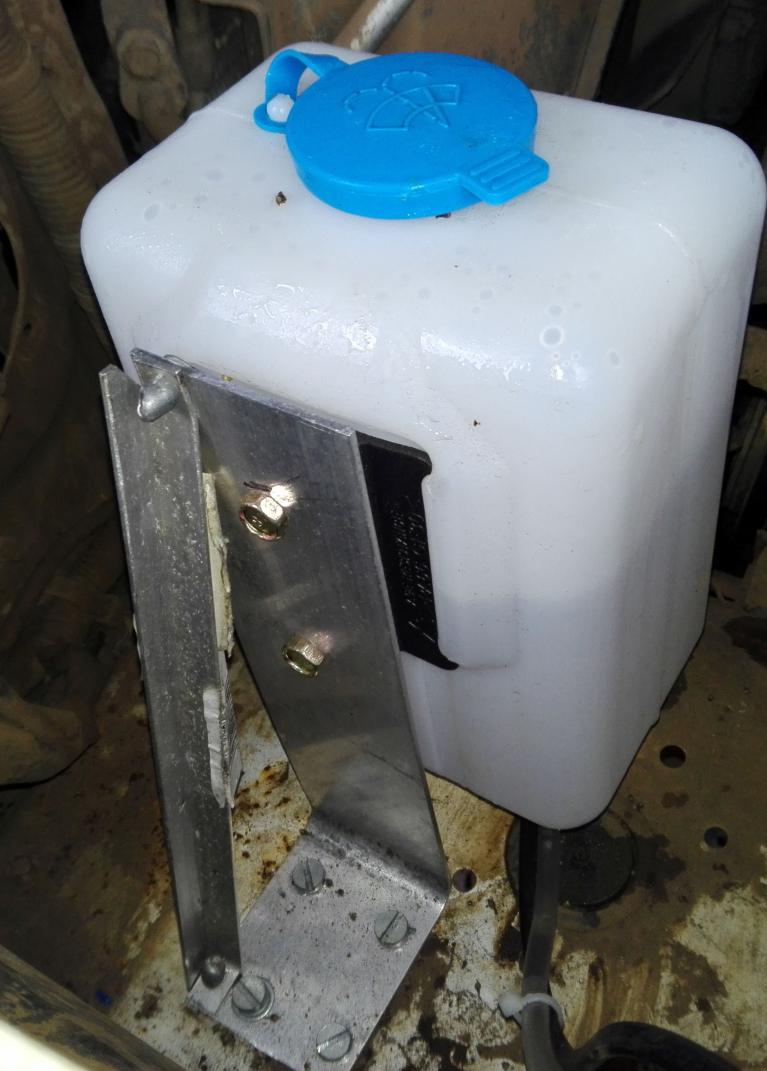 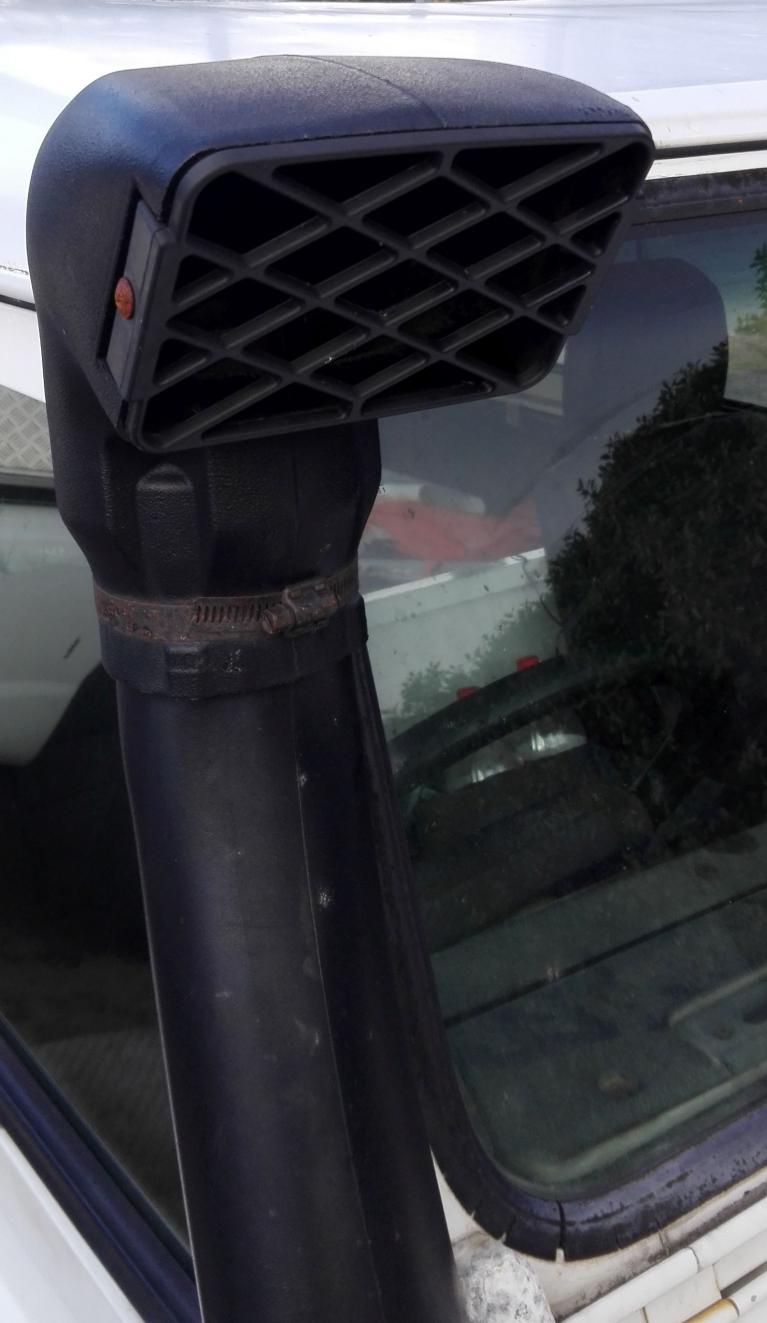 It is easy to imagine vast amounts of air being forced down the  throat of a forward-facing snorkel and greatly augmenting the engine's output power. In fact the laws of physics tell us the dynamic (ram) pressure at the mouth of the snorkel would be only 5.5hPa at 120Km/h, and that only if no air was flowing into the mouth of the snorkel. With the snorkel drawing in air at 120 litres per second the dynamic pressure drops to about 2.5hPa. Compare this to the partial vacuum of up ten times that figure that may exist between the air filter and the turbocharger if the filter is even slightly dirty, to put this in perspective. A forward-facing snorkel will make no significant improvement to an engine's output power, though it may confer other important benefits such as dust and splashed water avoidance.