The project is motorising all four Winterhoff corner steadies so that the caravan can be leveled from within using only a mobile phone and dedicated app.

The app presents a spirit level and four groups of buttons - one group for each corner steady, and two buttons per group  - one button to extend, and one button to retract the steady. The buttons are manipulated to raise the lowest corners of the caravan until the cross-hairs indicate that the platform is completely horizontal. The remaining steadies are then extended to prevent the caravan rocking on its suspension.

The motor drives are current limited and detect end-of-travel automatically. Motor current is also limited to prevent excessive  stress on the extendable legs.

Other vailable lifting systems are either too weak to be effective (they need the assistance of hydraulic jacks), or cost R20,000 to R25,000 per corner.

By by upgrading your existing steadies by DIYyou save the cost of buying these items again and only need to add the  gearmotor (<R4500) and some minor hardwareitem. The steadies can be driven by a self-built (<R1000) system of switches and relays, or by means of our MotorPac with Leveler extension and our mobile phone app.

You need only moderate skills and commonplace small tools to implement this yourself, thereby cutting out the cost of middlemen and the expensive labour of others artisans. The caravan does not need to be taken to any workshop - you can do this in your own time and at your own pace.

The steady requires just a few simpla adaptions and the caravan itself needs no modification whatsoever. The steady goes back on the original bolt holes. The adaption of each steady requires about half a day's work. Should the caravan be sold the steadies can be returned to manual operation by simply un-bolting the gearmotors

There are three M10 bolts that secure the corner steady to the caravan chassis. Use a pair of 17mm AF spanners to remove these bolts and the assembly will be freed. Discard the bolts and nuts if they show significant corrosion. 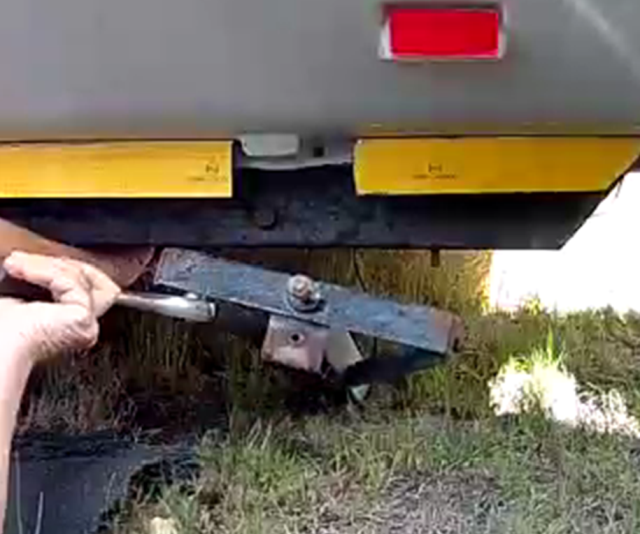 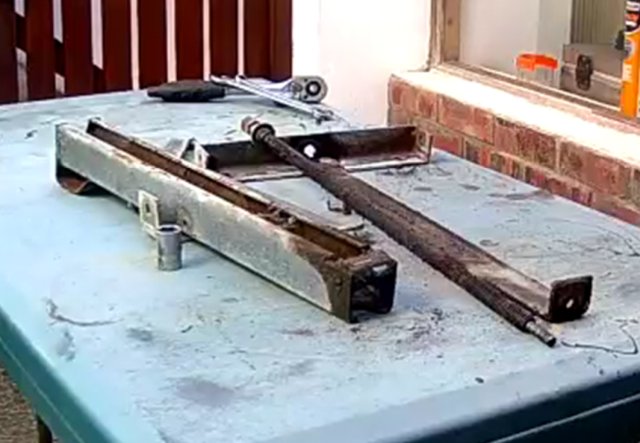 Disassemble the mechanism and throroughly clean all its parts with a grease solvent. Repair any damage or excessive wear and tear it has suffered in the past. Painting the parts will be undertaken in one of the last stages before reassembly.

Introduction to the Gearmotor

The gearmotor we use is from Transtecno and is made in Italy. The model of worm drive gearbox is CM30 with a 60:1 reduction ratio, producing 50 RPM on the output shaft under no load.

The motor is an ECM180.120  - 12VDC 180W 3000RPM ferrite magnet DC motor rated for an S1 continuous duty of 180W and an S2 intermittent duty of 360W. The motor is supported entirely by the gearbox and requires no mounting of its own. Although this motor is rated for 30A max we never exceed 25A which is sufficient current to produce a torque of 40Nm on the output shaft.

The gearbox mounts transversely on the frame of the corner steady by 3 M6 screws set around the 14mm hollow output shaft. 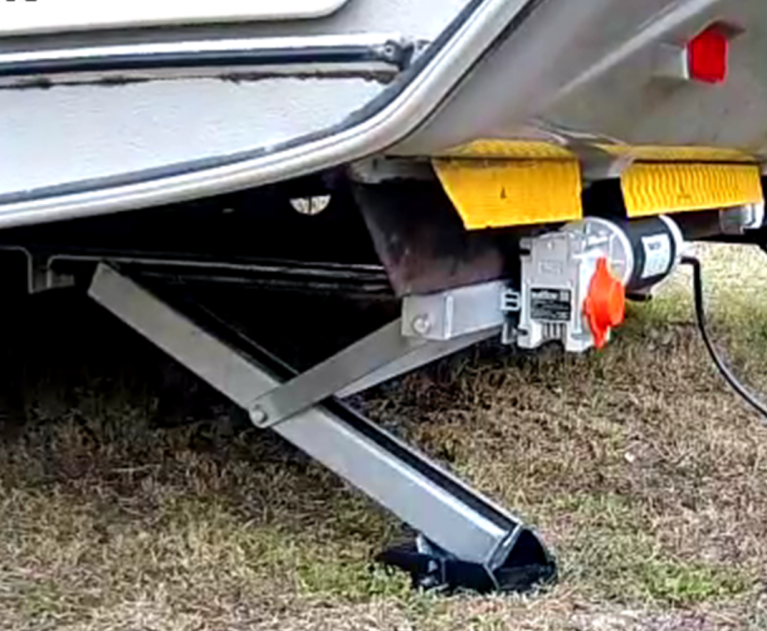 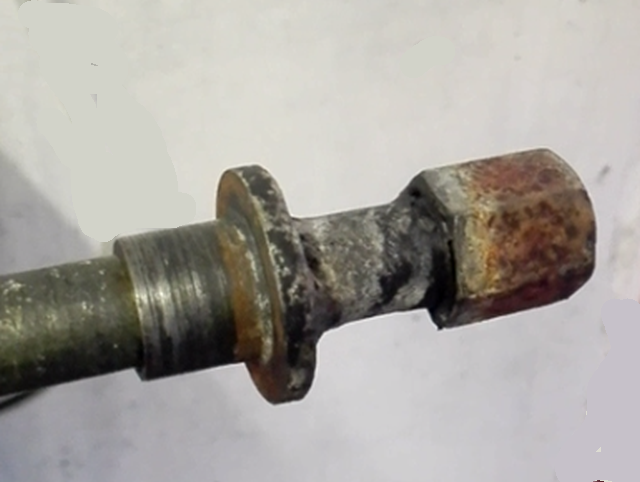 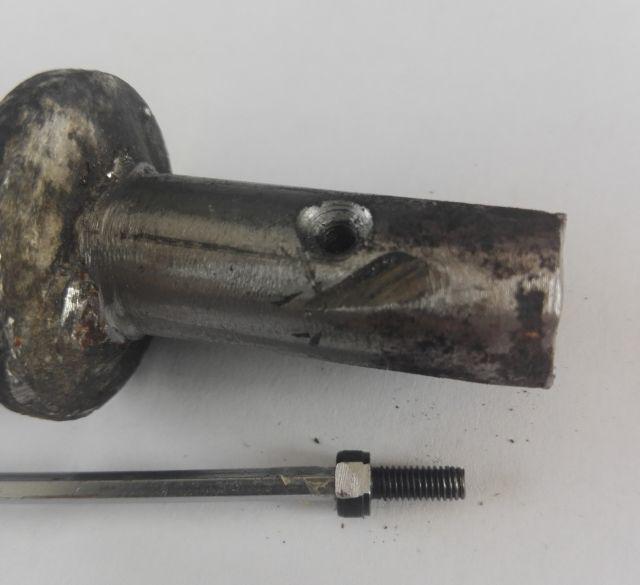 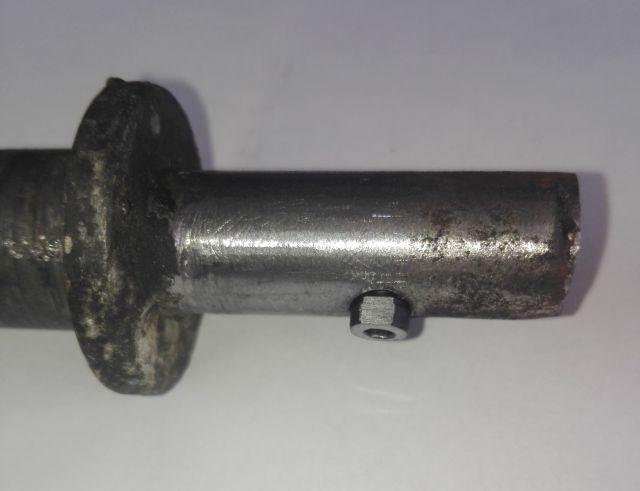 The leadscrew has a 5/8ths inch Acme thread and nut for extending and retracting the support leg. At one end the leadscrew has been turned down to a 14mm shaft and a 19mm AF hex sleeve has been welded to the extreme end, to engage with a 19mm socket on the manual driving crank.

For the leadscrew to engage with the gearbox output shaft the hex sleeve must be removed. This is done by slicing off the extreme end of the leadscrew with a hacksaw or extra thin cutting disc. As much of the length of the shaft must be preserved so as to connect with the gearbox. Once welding at the end of the shaft is removed there will be a visible crack between the shaft and the sleeve.

If the sleeve is difficult to slide off the shaft it must be slit along its length to relieve the tension that binds it to the shaft. Be careful not to damage the shaft when you do this.

With the 19mm hex sleeve removed clean up the shaft until it makes an easy sliding fit into the hollow output shaft of the CM30 gearbox. Some excess welding on the thrust flange may encroach on the length of the shaft. This must be removed by filing so that the flange can come within a few milimetres of the output shaft of the gearbox, leaving only the width of a normal welding fillet separating them.

A key must be provided on the leadscrew to engage with the keyway in the output shaft. An alternative to cutting a half-moon keyway into the leadscrew is to employ the head of a high-tensile capscrew to do the job. An M3 cap screw has a head 5,5mm in diameter, and a shear strength of more than 15,000N,  which makes it perfect for this requirement. The head ofthe cap screw must be slightly buried in the surface of the leadscrew to be effective.

Drill a 2,5mm hole through an exact diameter of the shaft midway between the flange and the shaft end, and tap an M3 thread into this hole to a depth sufficient to accommodate the screw.

Then expand the tapped hole to 5,5mm on one side only, and just sufficient to form a minimal sidewall all around the circumference of this hole, so it can accept the lowest rim of the screw's head.

Since the head of the screw is 5,5mm across, and the keyway only 5mm wide, you will need to grind two flats on opposing sides of the screw's head to allow it to slide snugly into the keyway.

In its present form the frame is too narrow to accept the three M6 bolt holes that we want to use to mount the gearbox on it. Therefore we will extend it downwards by welding on a length of 25mm wide flat bar. Ensure that the face formed by the frame and the extension is flat and at right angles to the length of the frame. This is because the leadscrew needs to be held perpendicular to the gearbox to prevent unusual stress on the gearbox as well as leadscrew. At manufacture not much attention is needed or given to keeping these components a right angles to each other.

Next mark and drill the three 6mm holes that will attach the gearbox to the frame. They are set at 90° to each other on a 63mm diameter circle centred on the output shaft. These holes need to by placed with some accuracy. Drill 6,0mm holes in all pieces initially. Once all parts are accurately aligned and secured the holes can be widened to 6,5mm (or even 7mm to compensate for minor hole positioning errors).

The final step is welding to the frame three standoffs, cut from a 15mm square tube, that will separate the gearbox from the frame and provide the necessary clearance for the  flange on the leadscrew to move freely. These pieces need holes drilled to match those in the frame and should not extend excessively into the radius around the leadscrew because they will interfere with the gearbox casing if they do.

The three M6 bolts that hold the gearbox to the frame should have a thread length suffient for 10mm to enter the tapped holes in the gearbox and should be greased to prevent corrosion. Transtecno does not publish torque figures for these bolts, but remember that the housings are aluminium and the max torque figure for greased bolts is half of that for dry threads.

To prevent the extending of the leg past the vertical you should weld a stop block to the length of the frame in a postion that the nut reaches when the leg is vertical. Be sure that the block does not touch the leadscrew, and will be freely accommodated inside the leg when it fully retracts. 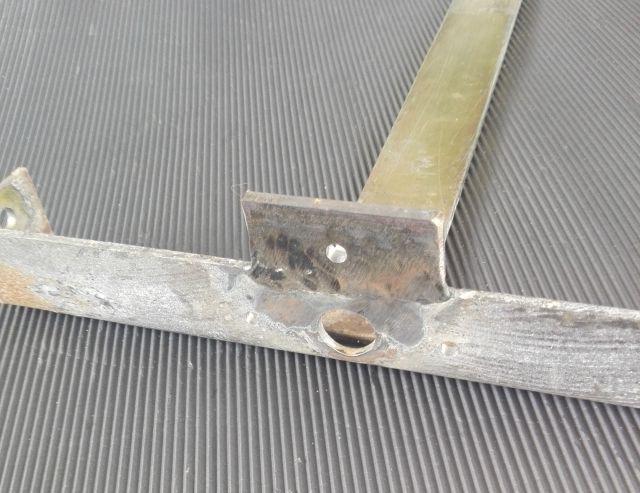 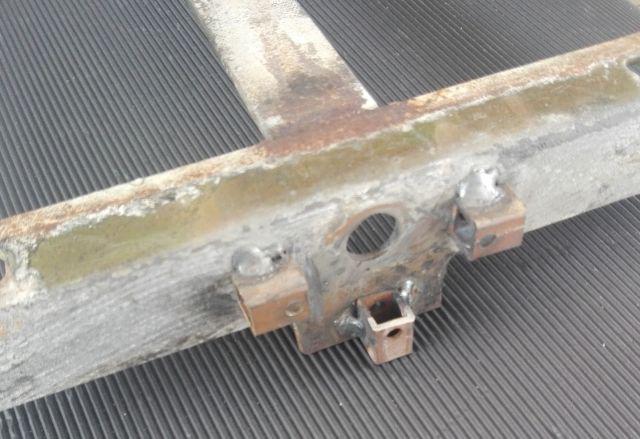 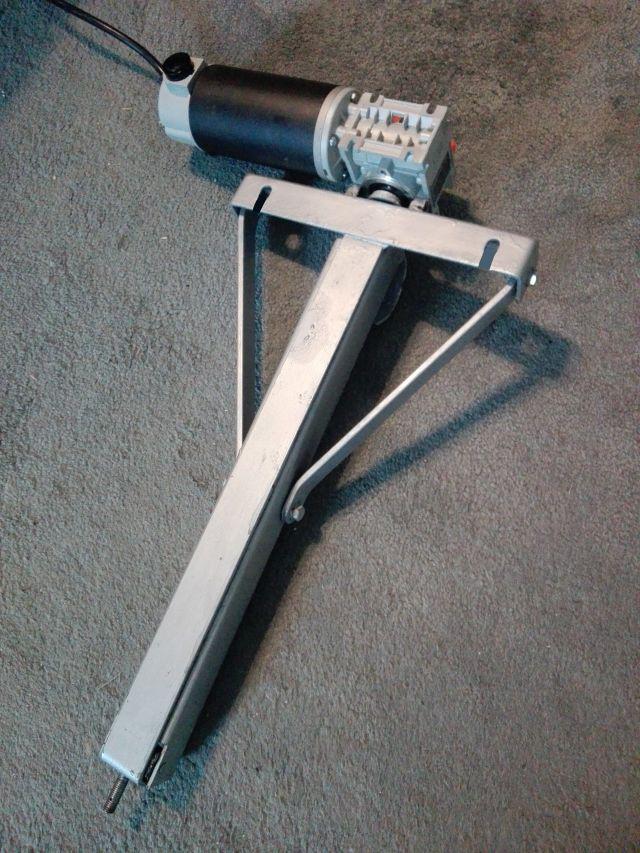 The mechanism can now be assembled. The leadscrew should not ba able to touch any part of the frame other than at the at the thrust flange and the M10 screw at the opposite end. The gearbox mounting face should be square to the axis of the leadscrew, and the three M6 screws should turn in freely without binding on the edge of their holes. If needed for the gearbox to find the correct position, the holes can be drilled out up to 7mm.

The thrust flange gets a washer greased or two between it and the frame to reduce friction, and with the gearbox in place it should have a couple of millimetres of play before the the back of the flange touches the gearbox. This play will be limited by the M10 nuts on the nose of the leadscrew. The adjustment of these nuts is critically important. Too tight and they will create unwanted friction between the screw and the frame, too loose and they will allow undue axial pressure from the thrust flange against to gearbox when the leg is fully retracted and the leadscrew nut reaches its end of travel.

The steady is now ready for painting, final assembly and lubrication. Replace the M8 bolts, washers and Nylock nuts if they are corroded and grease moving contact surfaces evenly but sparingly. The mounting hole of the  angle bracket that supports the tail end of the leadscrew may need to be slotted to allow it to be properly positioned. The fuction of this bracket, apart from supporting the inner end of the steady, is to limit the axial travel of the leadscrew without restricting its freedom to turn, as described above.

The cross bar of the steady must align flush with the cross member under the caravan to which it is mounted. This is to avoid contact between the motor and the cross member. It may be necessary to convert the holes in the cross bar to slots, as shown at left, to provide sufficient movement to achieve this. This also makes mounting the steady a lot easier. Similarly the chassis mounting-hole in the angle bracket at the nose of the steady can be made into a slot to give scope for adjustment that not needed under manual operation.

You can see a video of the assembly in operation here

Under no-load conditions the leadscrew will turn at 50 RPM which means the nut will advance at 157mm per minute, so it will take about half a minute to extend the leg, and can never take longer than two minutes to reach the stop block. The average battery current drawn by the motor during the no-load phase is about 7A, but the current flow will increase sharply, albeit for a very short time, once the leg touches the ground.

If one assumes an average current of 10A, and each leg takes one minute to be extended, than the total draw on the battery will be 40/60Ah or 0,6Ah.

When used withour MotorPac Control the end-of-travel motor stall is detected by the current spike and the motor is disconnected, thereby removing the need for limit switches. If the motor is driven from another current source then provision must be made for detecting motor stall, or limit switches must be placed to detect end-of-travel and prevent damage to the motor from excess current.